Someone liked these more!

It isn’t a great feel, pondering over a blank sheet, struggling with the direction the nib of one’s pen must glide towards. The pen cap seeks a one-of-its-kind solace when pinned between the teeth and tongue, for this little effect gives an intellectual air of discerning one’s thoughts. To begin the process of writing, the need to put together words in an unbreakable string is evident. But there are times when one gets stuck while practising the craft. We pause from our scribbling to reflect upon the next ‘it’ along with an ideal way to emote that imprint. In such bits, choosing to continue with whatsoever comes to mind is a tough call to beckon to, because nothing makes sense. The train of thought feels lost, so much so, that what’s written thus far also starts sounding vague in the head.

The flow begins to go astray. We look up from our paper and notice the tiny bubbles floating weightlessly in the air. We survey the horizon underlining the sky’s and the sea’s mating zone. And recce the morning commuters buzzing in the beeline through the pin-straight traffic. But we’re unable to knot together any observations that are seizing our sight. As much as we try to fuse the dots, the design appears individualistic. Scattered. And resolute in its self-appointed position. It is as if our productions conspire a vendetta to throttle our efforts. There are umpteen ways to gift an idea with a written life, but it is convenient to remain dazed at such times. We feel stupefied for we find ourselves interpreting the next beginning. Or, are probably asking ourselves the most ludicrous of all questions – what do I write? How about anything?

While one tackles bouts of unresponsive setbacks, a few scribblers scrap the draft and start afresh. As if an earlier version never existed. They erase and wipe the version off their memory and give the craft another attempt. Like transferring the old wine in a new bottle. The creators are cautious while discharging their train of thoughts here, lest they go down the same road to be gripped by the quicksand once more. The other of the hungover lot sleeps on practising the craft. Whether for a half hour, a one, days together or weeks. Sometimes, months. They remember to forget about what they had drafted and tackle it later. In the recess, they are likely to have forgotten the reason they had carved that fastidious slice of view in the first place. Their attempt of retrial helps them unravel if a refresh – after an interlude – can bequeath their ego with a relative gratification. 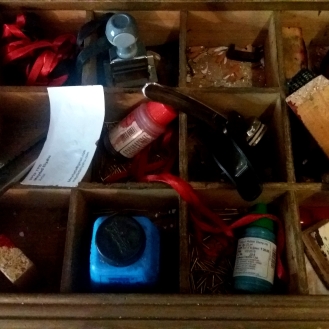 Except for a core idea, writers have no thought-process other than to how best play with it. (I solemnly swear that I am up to no good.) They are known to live in a world of illusions. Content with self-inflicted observations and believing them to be the distinctive-most in the lot, writers can be vain. And self-obsessed. They refuse to emerge from their remote setup and merge into a crowd, even if for a gathering of their professed community. It is asking too much of them. Worse, they may agree to be present, physically just. It is natural for their minds to hop from one image to another. To fantasise. A trite that without a hitch, can be mistaken for an unconfirmed premise of objectification.

Irrespective of how much a fraternity scandalises and fabricates information of their near-and-dear ones, writers find it easy to be okay with subjective views. Sure, we could take a moment to digest a dear one’s death. But it is also for fact that this reality becomes a part of us a day or two later. Isn’t a mortal’s expiry an inevitable feat? Even if we grieve, we realise midway – as weird as it might sound – of the need to pull ourselves. Our tears can halt as abruptly as they had begun to spill. We are the kinds that find a same-sex knot and a case-at-hand eloping to marry tolerable. A graduate from one of the premier-most colleges in our neighbourhood who landed that job earning him a million despite no prior experience is excellent, and so is the news of the other kid earning a second PhD. Whoah! Period. That’s all the reaction we can assemble.

One of the reasons writers grasp their accessible happenings with a liberal attention could be owing to the limitless possibilities in their quaint environment. Which in turn, to some, reflects as our indifference towards mainstream subsistence. Cloning a baby? Why not? Choosing to adopt? Great. Facing infidelity in a marriage? Sad, what’s next? Certainties as such (re)instil a writer’s conviction into what is plausible in the world that they are a part of. If the echo of someone recounting to us a goosebumps-inducing tale is resilient in our memory, it is bound to reflect in our writing. Some time. In some way. Either as a fanciful occurrence or as a takeaway in the form of drawing a parallel.

Because at the end of the day, this is all we know.

So, just write. Inaugurate somewhere. It does not matter if it is the beginning, the midway or the closure. As writers, we aren’t such great decision-makers anyway, to have our contrivances preset.

No one buys a blank sheet of paper unless they intend to use it for an illustration. Or, are aiming to make a resale.

Your thoughts will lend me a smile :) Cancel reply